Washington City, Utah is a city found in the central part of Washington County. It also sits in the St. George Metropolitan area and borders the city of St. George. The entire metro is currently the fastest growing in the United States thanks to cities like Washington adding more residents and population to the St. George metro.

The current population of the city is just over 26,000 residents, up from a mere 8,000 in the year 2000. The fast-growing city features quick access to a number of state and national parks.These include Zion National Park, Bryce Canyon, Kolob State Park and Sand Hollow State Park.

Washington City brings tourists from all over the world to access its unique nature, dozens of trails, mild weather in the Fall, Spring and Winter months. Like, St. George, Washington City experiences high temperatures of over 100 degrees most days in the summertime.

Sitting on the border between St. George and Washington is the St. George Dinosaur Discovery Site at Johnson Farm. The farm is a rare site preserving a 200 million year old lake ecosystem with fossils, dinosaur footprints and more. Washington also offers residents and visitors other fun activities like Sand Hollow Reservoir, which has camping, fishing and access to off-roading trails and roads for exploring.

This spacious home has a newer heat pump, a new metal roof in 2018 and an awesome private back yard. The large shed houses the washer and dryer on one side and a work sp...

This custom built home has been tastefully completed with features and upgrades around every corner! The open floor plan offers a comfortable yet spacious feeling. Great ...

You'll love your brand new custom home in Washington Fields! As you enter through the front doors you'll love the large office. As you continue into the large open family...

Located in the quiet Southern Vistas neighborhood in Washington Fields you'll fall in love with this amazing brand-new custom home! You need to check this home out. As yo...

Great home in Kings row estates. This home is in great condition and is a must see at a great price! Perfect move in ready. Quiet neighborhood in a 55+ community and offe...

Check out this 5 bedroom, 2 bathroom home. Kitchen remodeled in 2018 with granite countertops & wood floors. New carpet in Master bedroom & living room. Back porch has be...

A flare of Tuscany in this warm & wonderful home awaits you in this sought after Green Springs Neighborhood. This home boasts class w/ its exquisite entry, plantation shu... 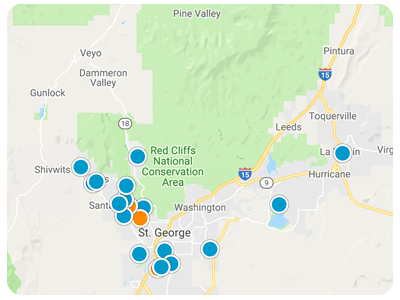